This complex mixed-use building in Seoul was meant to be the new house of the district council, its annex offices, replacement for the existing street market, and retrofit of the existing building to healthcare and cultural welfare centers. Our proposal was designed as a multi-layered porous mass that opens up and integrates to its surrounding neighbourhood. The memorable image of this building, the convenience of use by the district’s residents and its internal comfort levels were our main sources of inspiration. To achieve an optimum massing diagram, correlating to various programs of the buildings and the great vision of organizers, we analysed key parameters of the site, the climatic conditions and the importance of recreation of the local market. 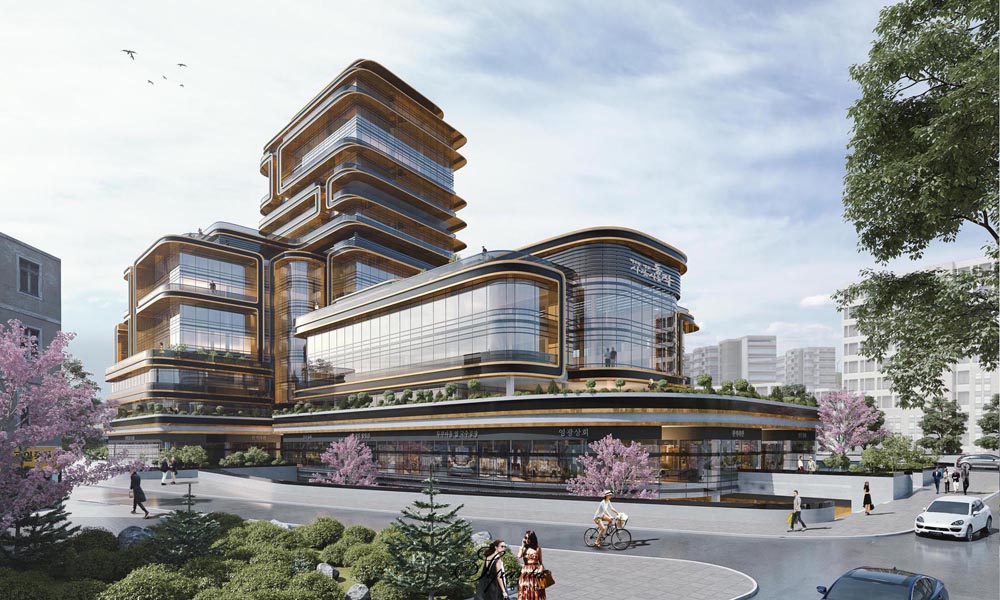 We envisaged this Complex as a mini-city in its own rights. It was important to us that the overall feel and experience of the project is a continuous one that creates a vibrant and active atmosphere for the residents and staff. This design was meant to push the conventional concept of the government building by creating three type of zones – for the community, with the community, by the community.

The juxtaposition of various volumes of the project, overlapping the programs horizontally and vertically were all to create variety and flexibility of use. The massing of the complex was designed to achieve a skyline that is humane and has a human scale. 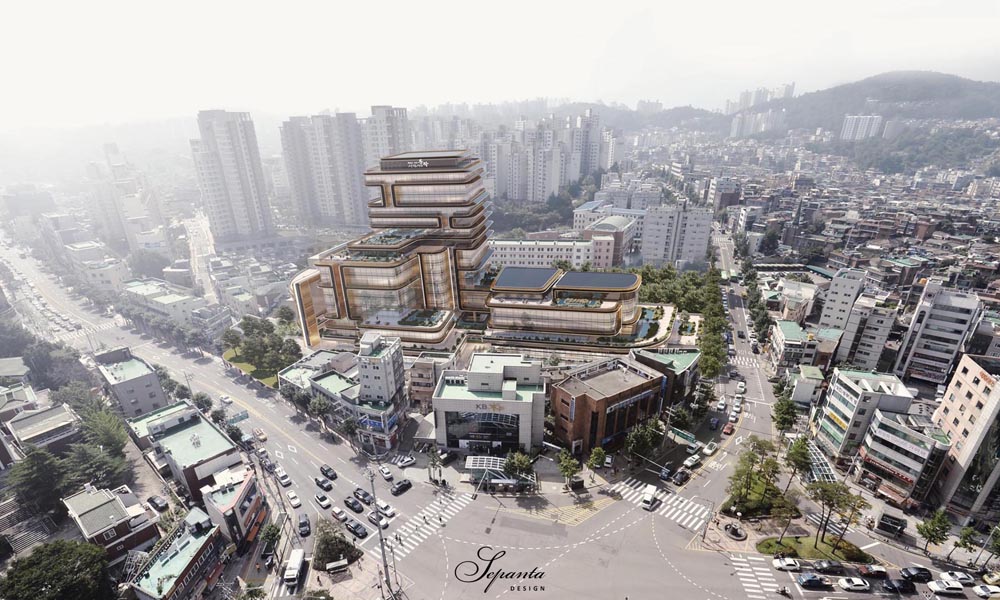 Achieving an optimized massing diagram that correlates to the various programs of the buildings, their context and site conditions and the climatic conditions of Seoul has been our key objective in the urban planning and massing of this multi-use governmental building. Following parameters have played the key role in defining our project’s mass: 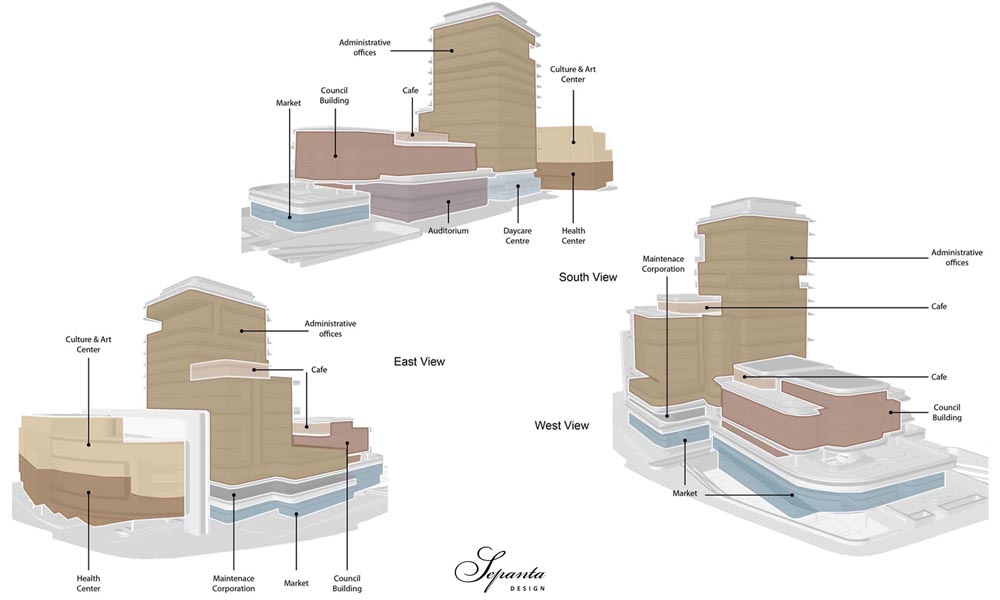 Creating comfortable, productive and pleasant experience for all different users and visitors of the complex has been our main objective in the architectural design of this project. Key elements that will help us to achieve this are as below: 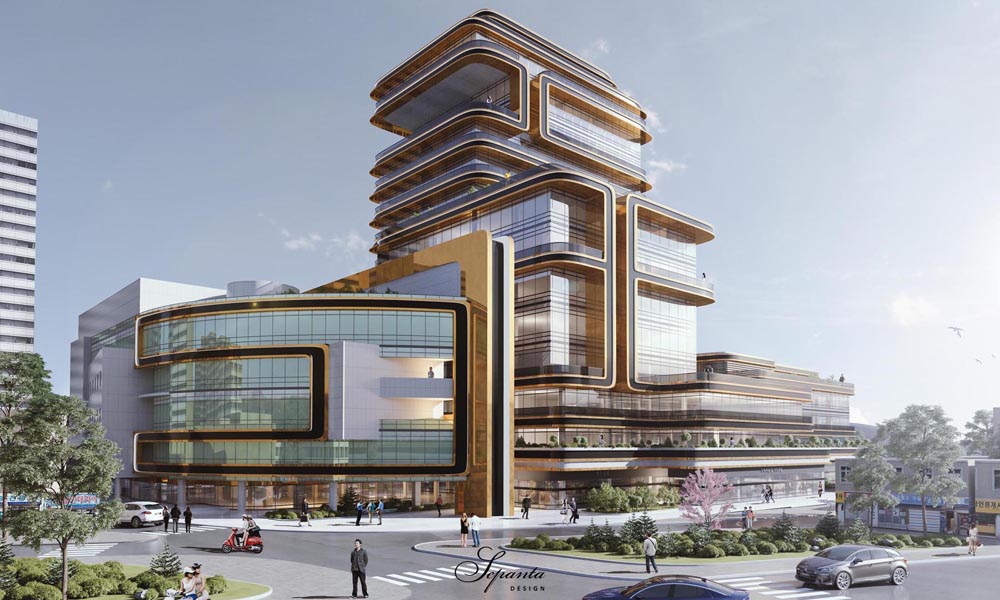 As the largest and most important component of the complex, the Administrative District Office Building sits at the centre of the complex, with its entrance lobby at the intersection of axes from the metro station and adjacent roads. Administrative Office Building is a vertical one that allows users to access its various levels from its centralized lobby space to each designated functional division. 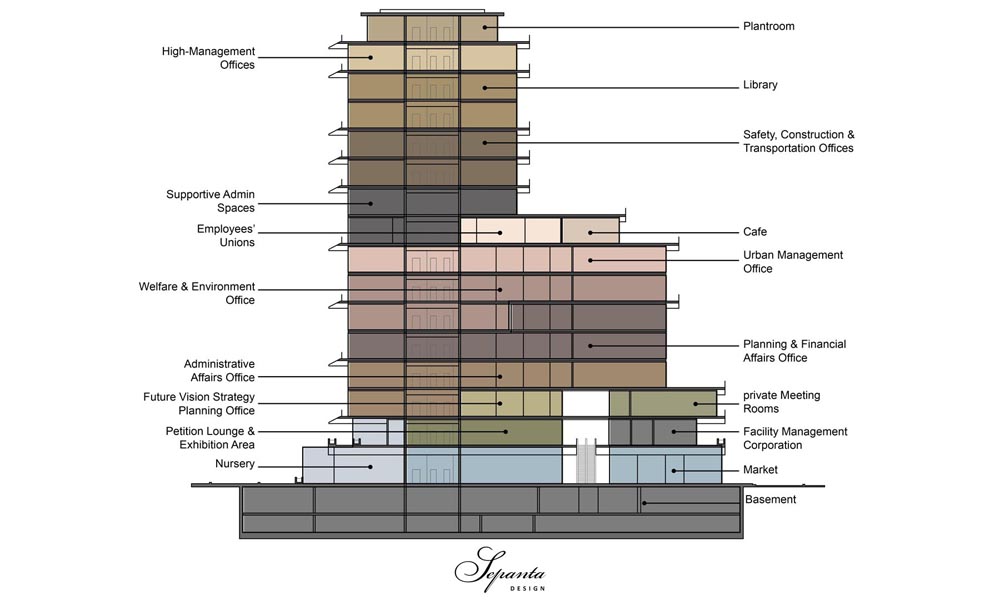 a.    Internal Zoning: The general allocation of the office divisions within the office tower is with consideration of each segments use, the level of its accessibility by visitors and its relation to other zones and divisions. Generally, the spaces that are frequently visited by residents have been kept at lower levels of the tower, the higher management and library at the top of the tower, and supportive spaces that are mostly used by staff and Unions employees at the centre of the tower. Access to green rooftops and intermediate cafes also have been other parameters to determine the program zoning within the office. 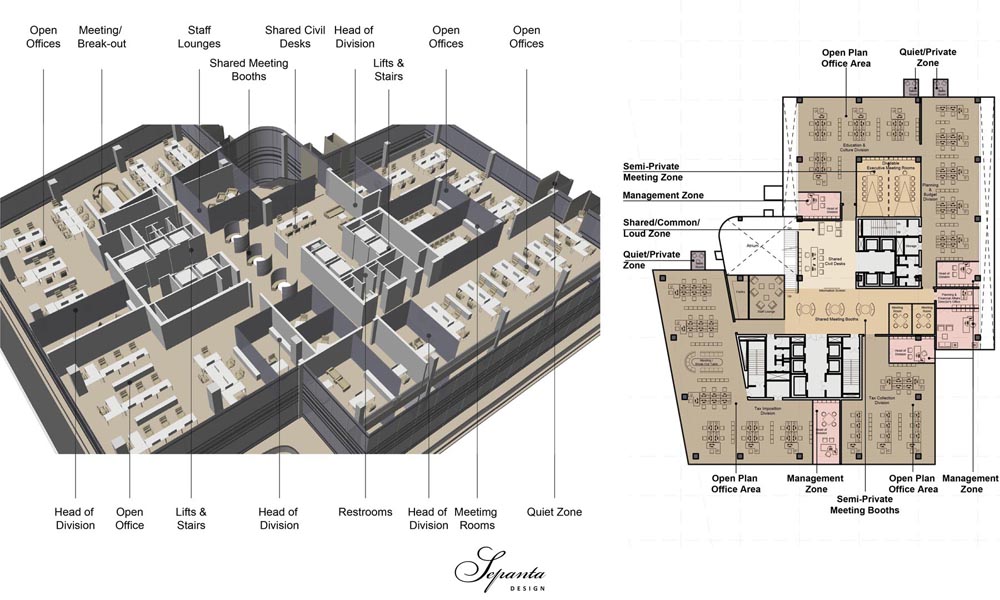 b.    Functional Overlaps: One of the design parameters for us has been to create and use horizontal and vertical functional overlaps between different office divisions that increase the flexibility and efficiency of office planning. 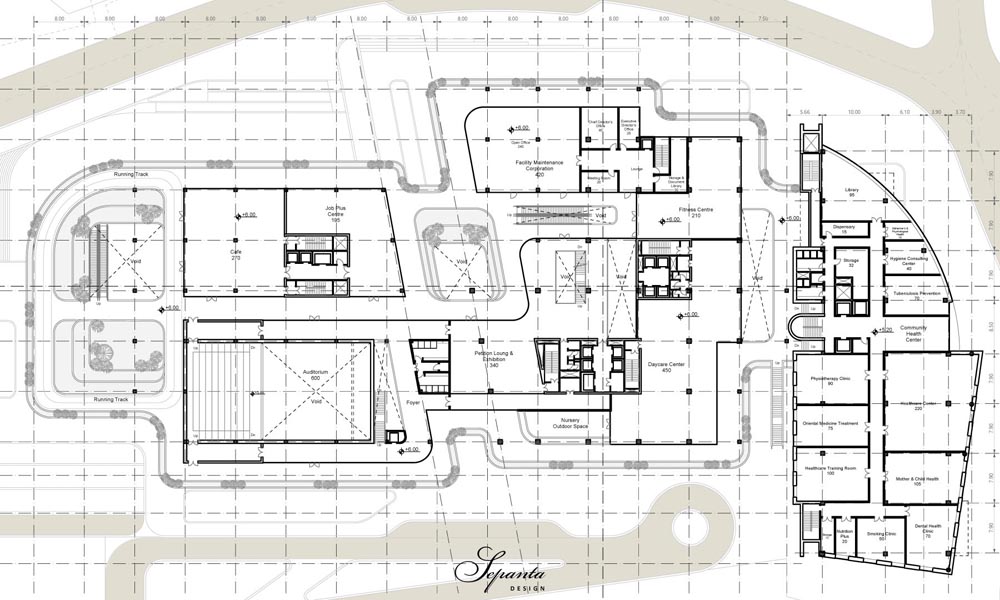 c.    Open Offices: are the key concept of any contemporary office space as they increase efficiency and flexibility, as well as increasing vibrancy, creativity and interaction among the employees. Our design also is based in this concept, while optimizing it by use of below parameters: 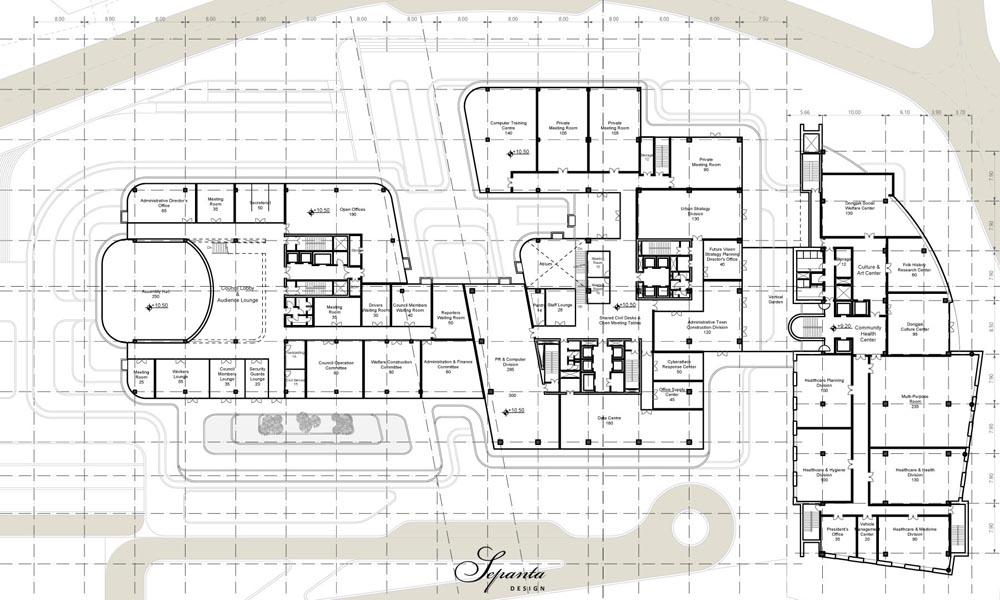 d.    Lobby & Exhibition Area: Administrative District Lobby is a spacious double-height space that is located at the centre of the site and intersection of its main axes. The lobby connects two main cores within the office building and is designed in conjunction with Petition Lounge and Exhibition Space. Petition Lounge is also laid on two levels and overlooks the office lobby on the upper level. There will be an easy access and movement from one space to the other.

Exhibition area also works closely with the multi-purpose atrium. The idea is that that people who come for the events in the atrium will be able to easily visit the adjacent exhibition space and in this way make it more visible and accessible. 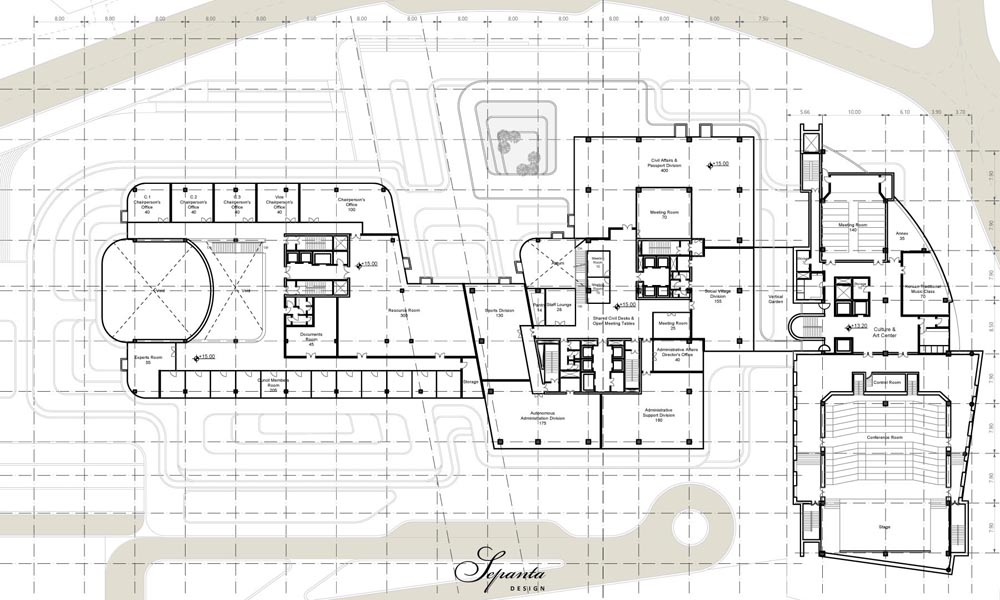 e.    Dining, Sports & Culture: are promoted in the office building. The introduction of pantries in each office floor, cafes on different levels of the complex, and large terraces that can be used for gathering and having lunch on (in good days) is to help the staff to eat well and relax at lunch breaks.

The complex also benefits from a gym and various activities spaces including running track on two different levels. There will also be some outdoor exercise facilities installed on certain areas of the roofs to encourage staff to exercise. 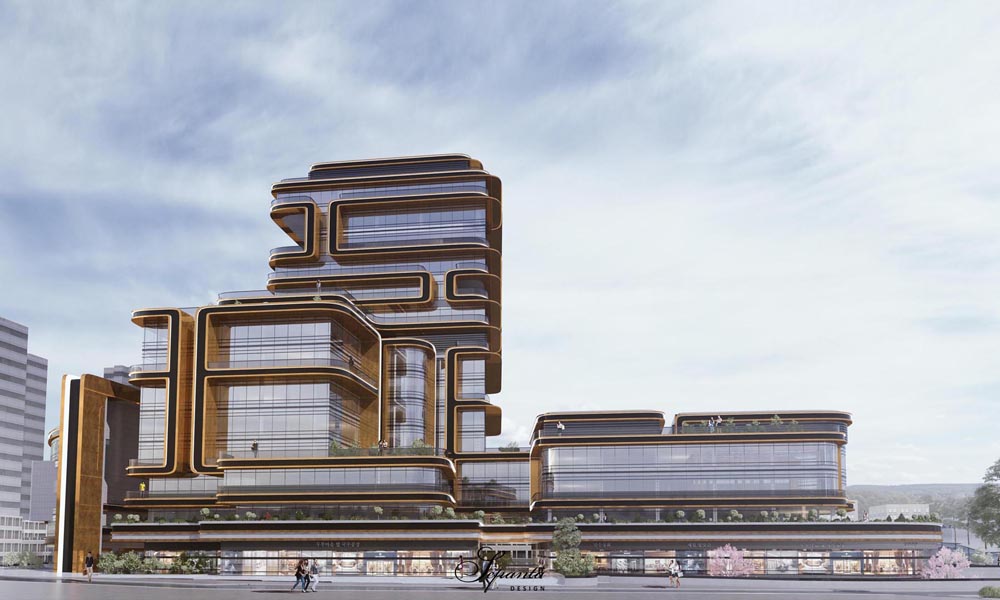 District Council Building is a horizontal one, located at the west side of the complex. It is accessed from its lobby at ground floor, located at the intersection of site’s main axes. Council Building is generally over two levels at 2nd and 3rd floors of the complex. The exceptions are its lobby at ground floor and its three-level-tall Assembly Hall. 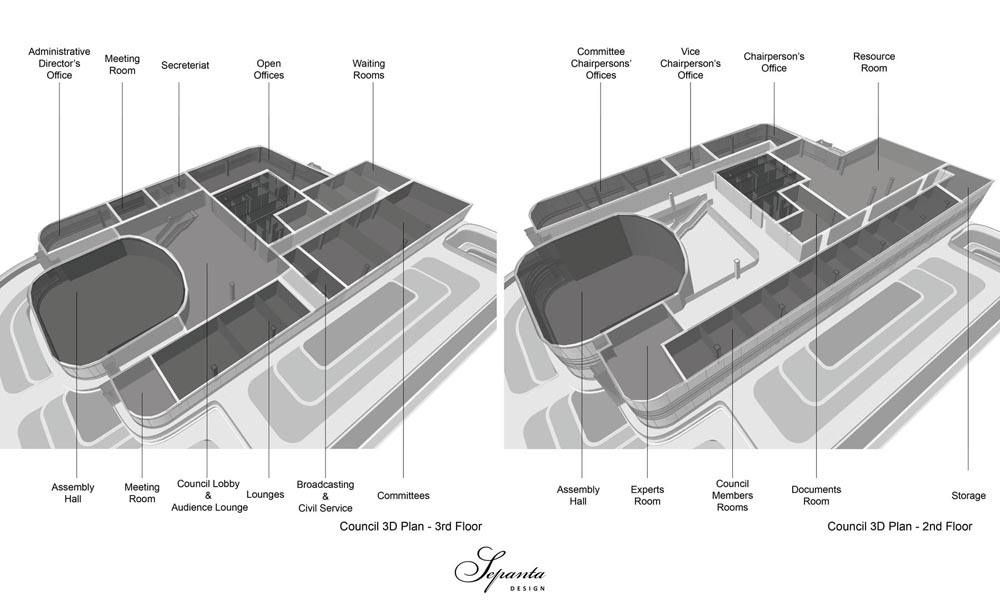 Recreation of the local market that will be demolished in a way that complies with modern life needs, while keeping its traditional essence has been a key challenge for design of this project. Market has been designed to recreate the feeling of a local market, rather than a shopping mall. This means that the market: 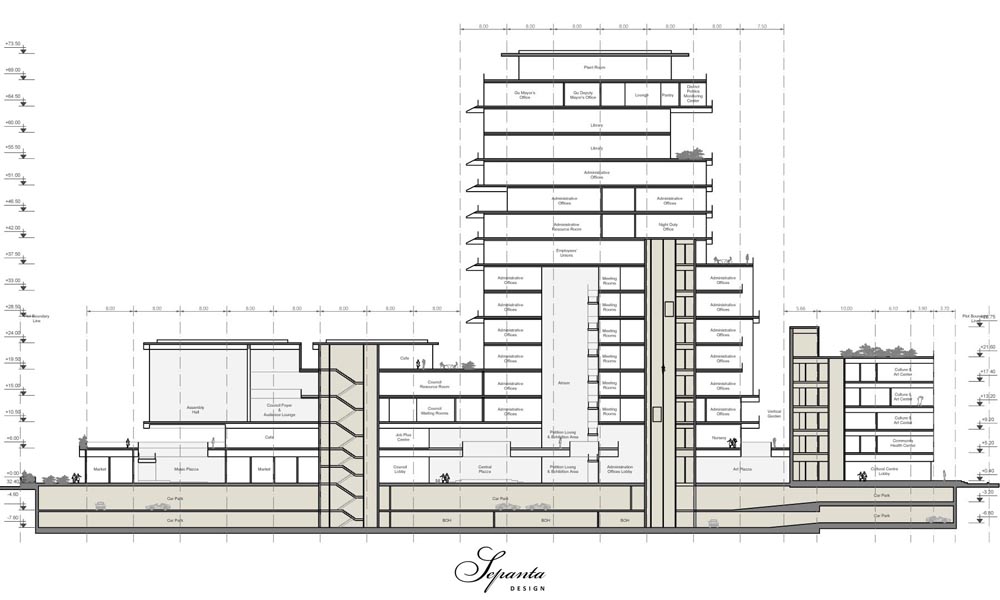 Façade design of Dongjak-gu Mixed-Use Public Administration Complex is not just an iconic façade, but a functional one that provides different services to the building.

a.    Shading: 3m deep extension of the slabs in the south façade of the building provides the required shading for office spaces. While south-facing office spaces will get a high level of indirect light through their fully glazed facade, they will not be disturbed by direct sunlight penetrating deep within these spaces.

b.    Terraces: The extension of the slab doesn’t happen only on the south side, but also on the other angles of the building in various depth and create occasional shallow or deep terraces for the use of office spaces.

c.    Energy Production: Another use of the façade and its slab extensions are providing a location for installation of PV Panels in optimum angle. Horizontally laid PV panels all along the southern façade will compensate for some part of the energy use of the building. These solar panels will be complemented by those located on the top of inaccessible roofs.

d.    Program Framing: The horizontal and vertical moves of the façade elements also play a visual role in framing and highlighting different functional divisions within the building. So for example the assembly hall, library, cafes, main divisions within the office spaces, etc are all recognizable by use of façade framing elements.

e.    Space Creation: The vertically framing elements of the façade also play another role which is creation of small enclosed usable spaces for offices. These spaces are defined as Quiet Rooms in Office Planning. 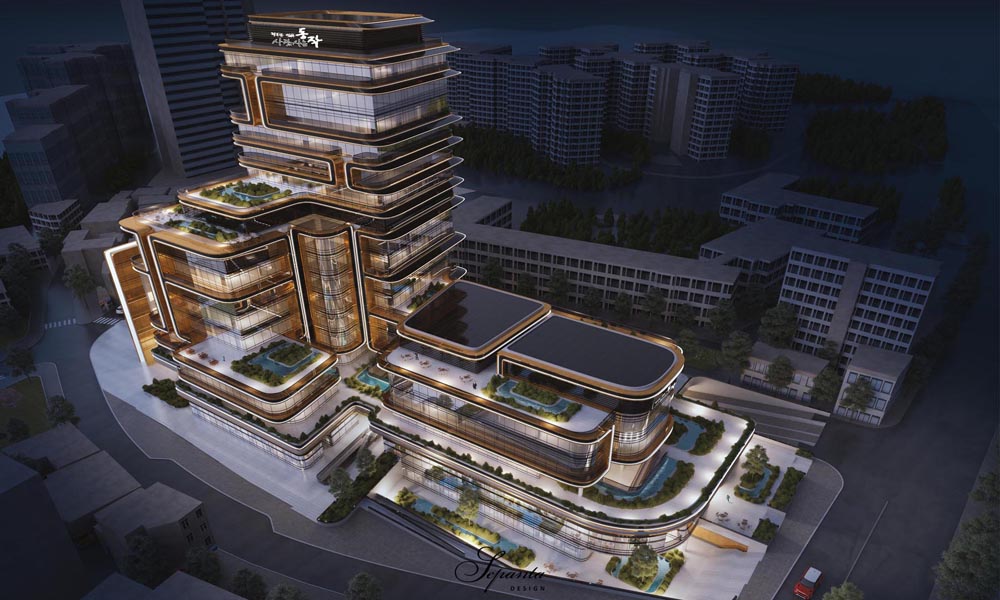 Ground-scape, Landscape and Roof-scapes are all one integrated concept for the design of the outdoor spaces of Dongjak-gu Mixed-Use Public Administration Complex. They compose of following elements: 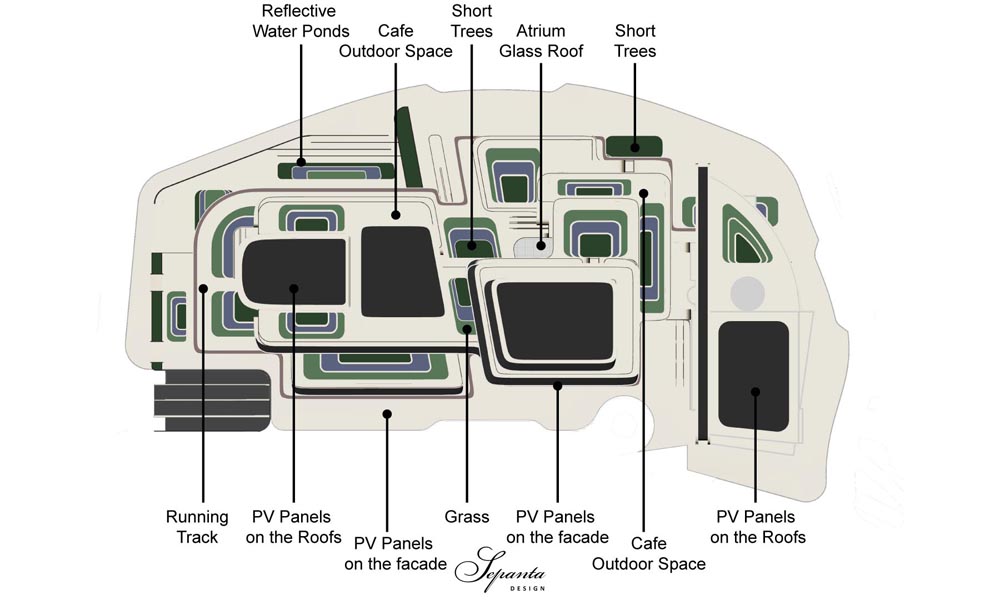